Behind the scenes of “The Monuments Men”

Berlin seems to pretty popular for american movie productions as there are more and more hollywood movies produced in Berlin (at least from my personal impression). At the moment George Clooney is shooting in Berlin for his new movie “The Monuments Men” which he works at as a director and actor.

Coincidentially I walked into set preparations for this movie two days ago, where the crew prepared the beautiful Berlin “Nikolaiviertel” to look like a Paris Neighbourhood from the 1920s or so. It was very interesting, and even though the images are not very much artistic, I still felt like some people might be interested. Have a look: 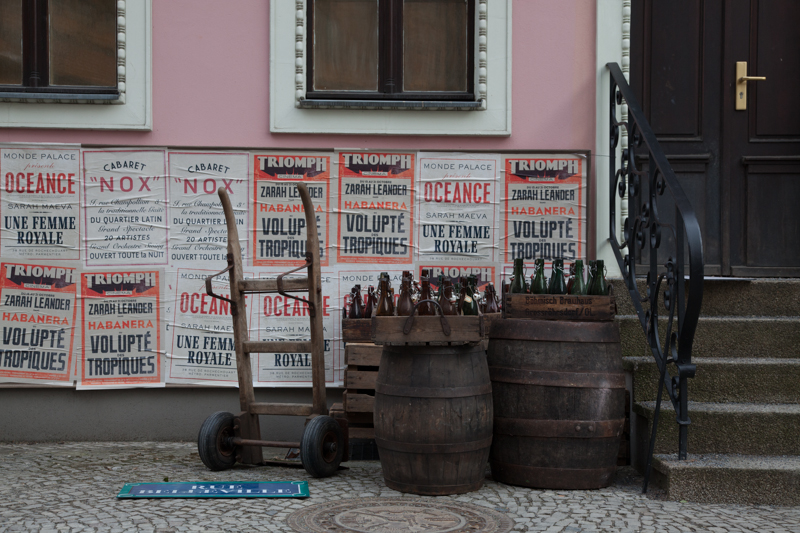 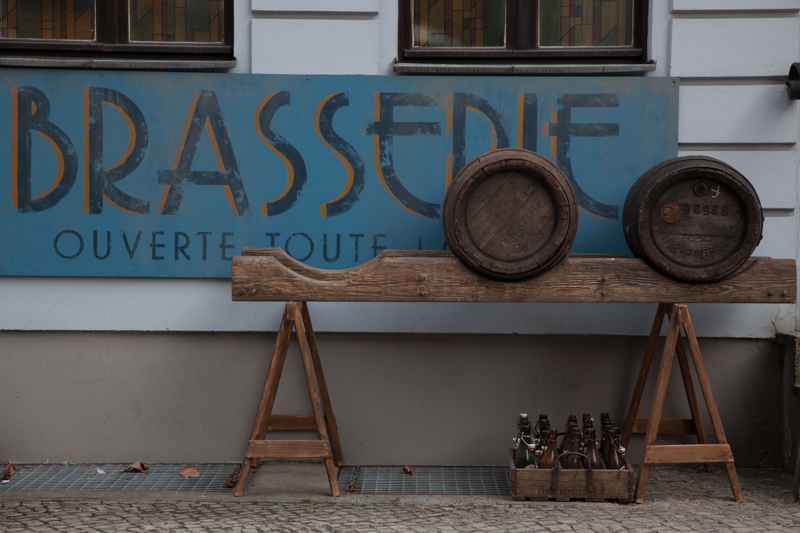 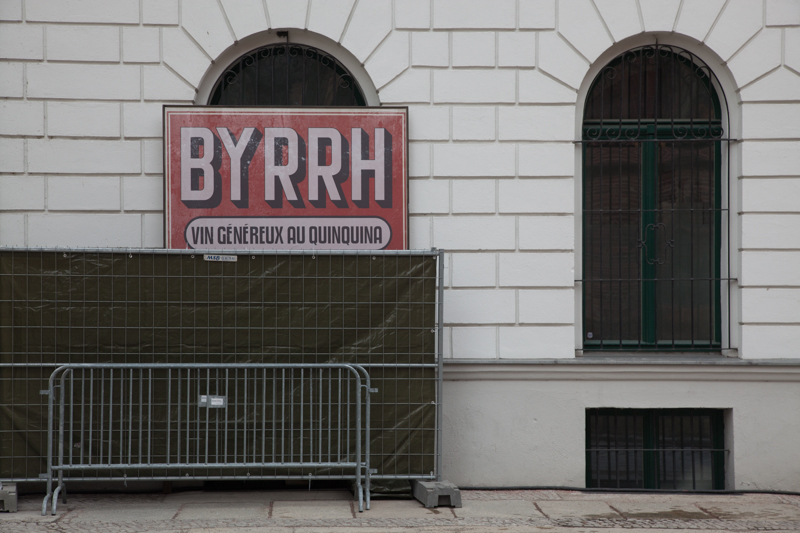 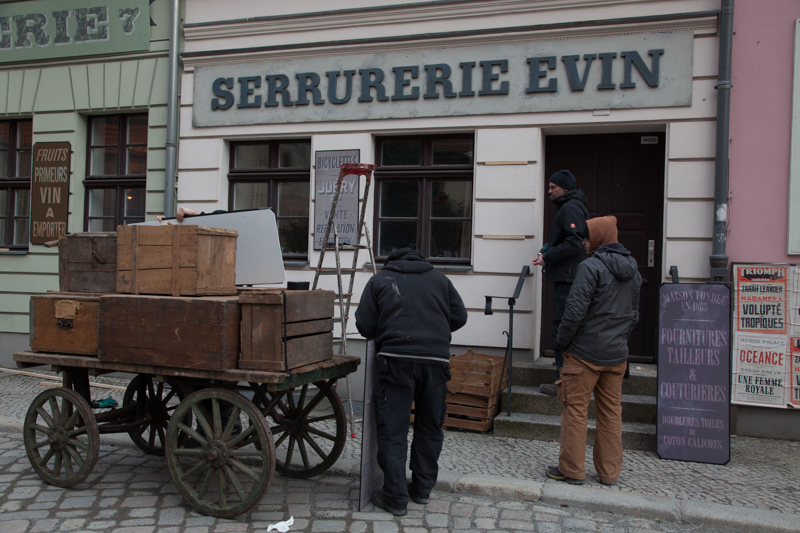 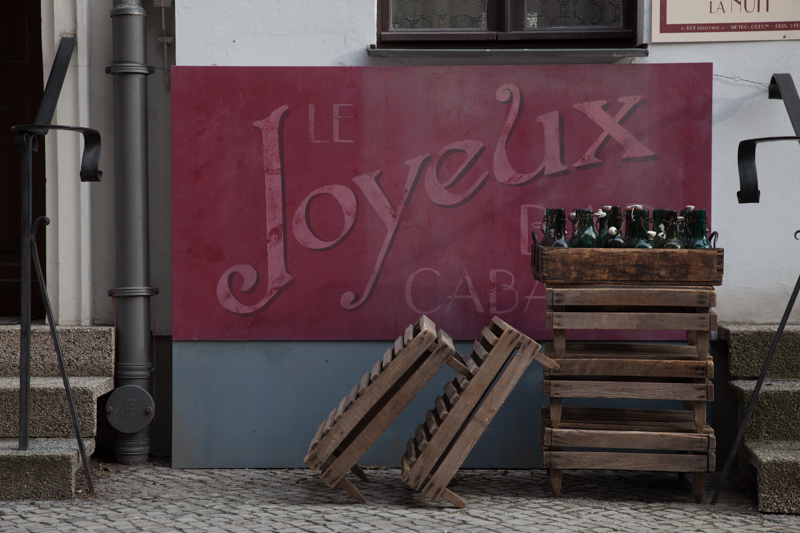 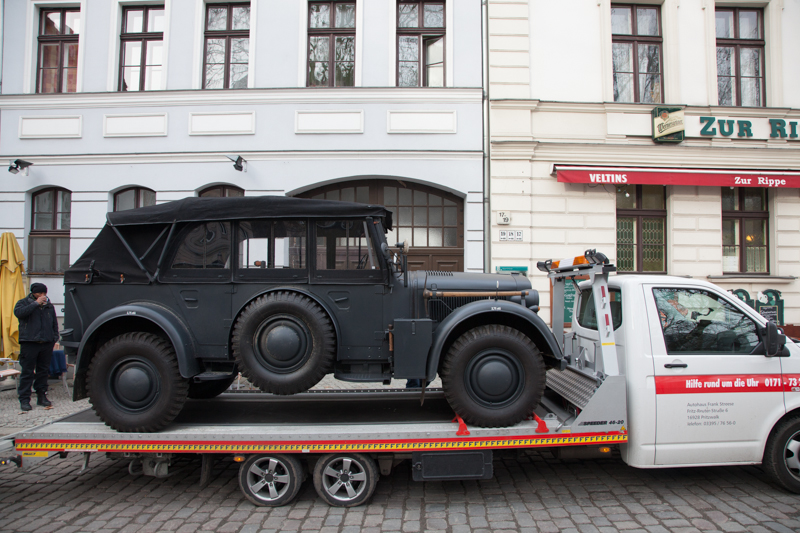 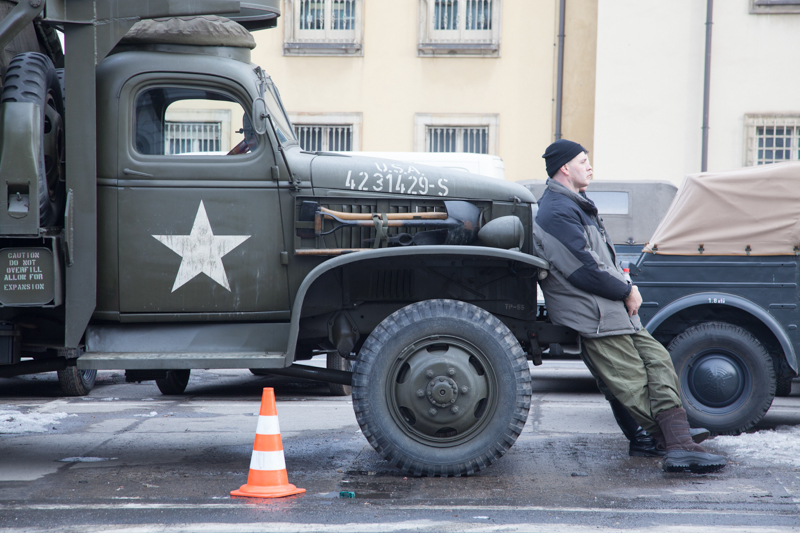 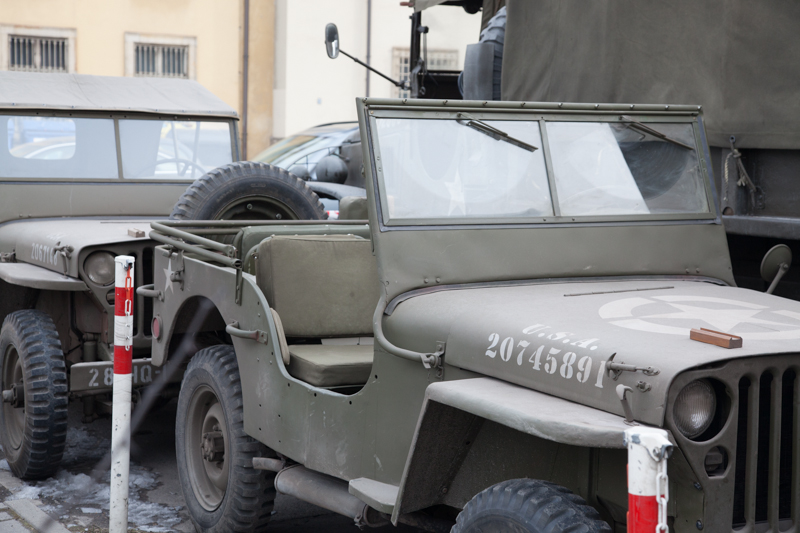 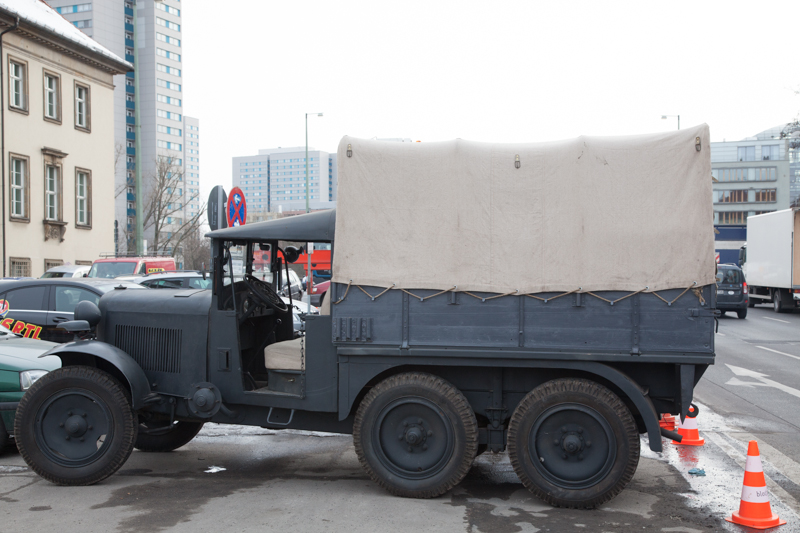 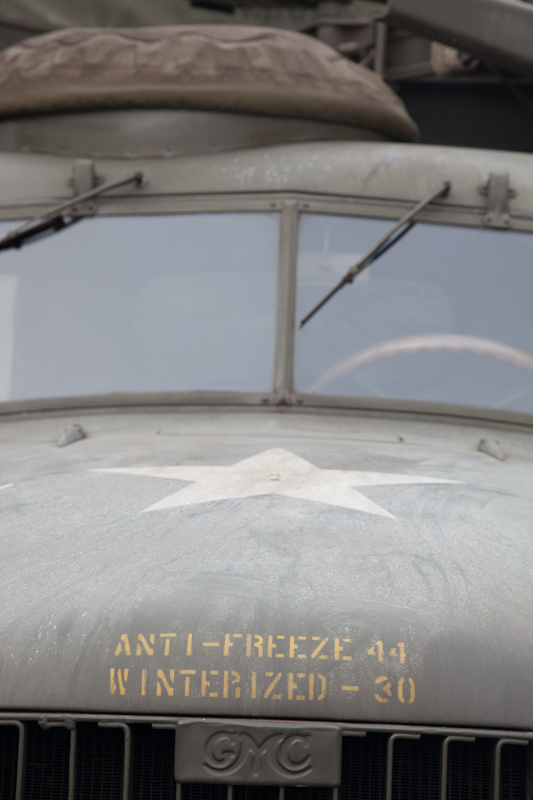 Yesterday was international labour day, a day that is traditionally connected to protests and demonstrations all around the world.

In Berlin, labour day protests have a long tradition, the revolutionary demonstration on May 1st celebrated its 25th anniversary this year.

But one thing at a time.
For me, the day started at around 1PM with visiting the MyFest, which is the biggest May Day celebration every year. 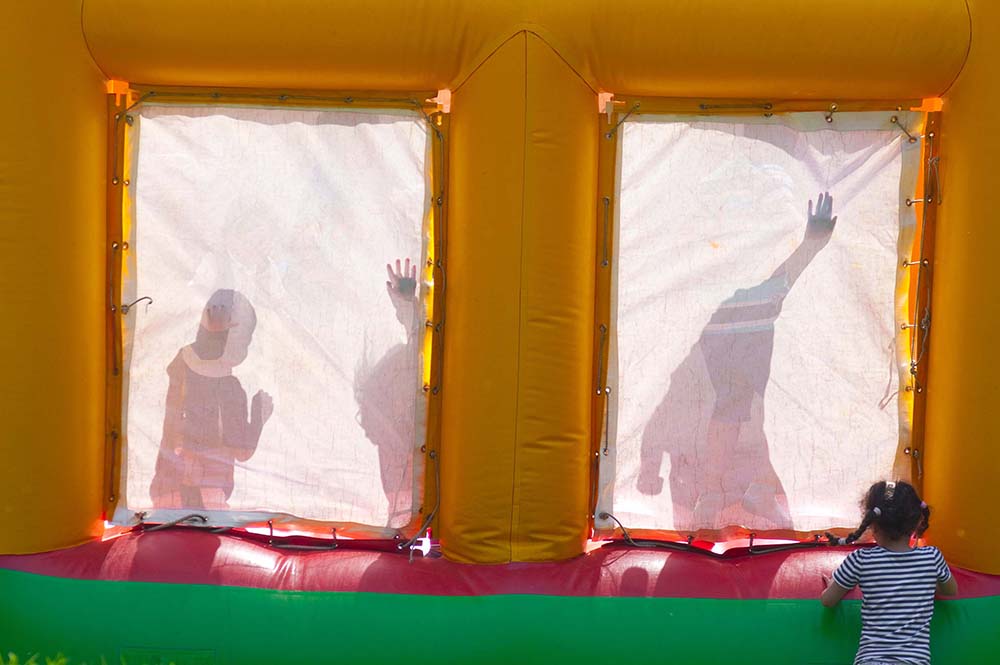 There were loads of people on the street, billions of little food stands and so much to see. 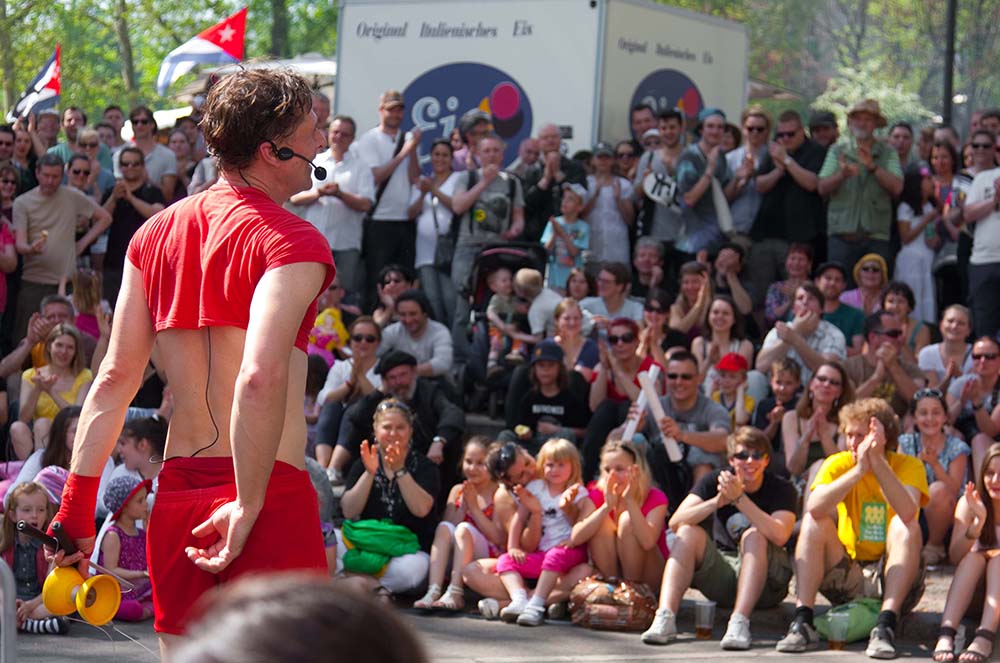 After walking around the MyFest for several hours, we sat down in the nearby Görlitzer Park, to enjoy the sun and relax a bit. It was hot, really hot, and so we were more than thankful for the short shower of rain that cooled us down (while the sun was still shining!!!)

Shortly after this shower of rain, the demonstration was about to start, so the last young people hit the road to home.

At 6 PM, the scheduled beginning time of the big demonstration, nothing happened.
The start of the demo was delayed almost 2 hours, until it started its way on the planned tour.
In the 2 hours of waiting for the demo to start, there were some interesting actions happening in the group of people. 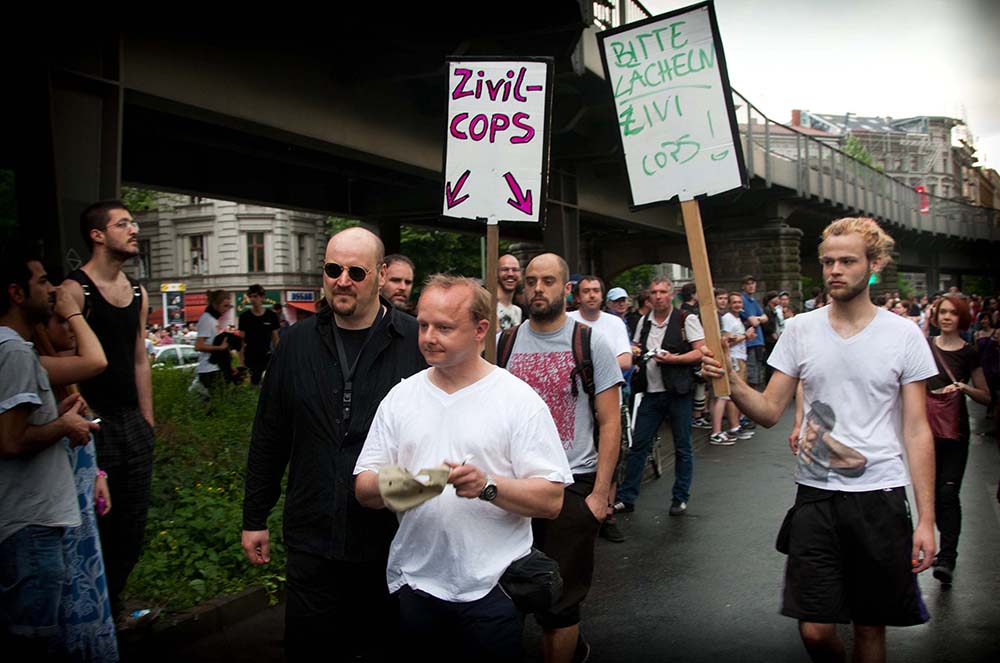 After the demonstration started, the atmosphere was heating up.
Paroles were called and the first stones were thrown, but except some demolished windows, nothing serious happened.

After the demo passed the Axel Springer Haus, the central of germanies biggest and certainly much hated yellow press publisher, the whole atmosphere changed.
Explosives were thrown, as well as dozens of stones and bottles. This resulted in several arrests, which leaded to even more aggressiveness in the mob. At this point, the police decided to cancel the whole demonstration, due to several malicious damages and assaults.

Before the atmosphere finally cooled down, a trash bin was set on fire, which attracted many people to rest and enjoy the fire. The police requested the masses to leave the spot, and emphasized this request by extinguishing the flames. The street started to empty slowly, and the whole extent of the violence became visible. All in all it was an interesting and demanding day, which was definitely worth the risk.

I even met an amazing dutch riot photographer, who invited me for a drink after the street action was over.
Thank you Tom!

Please note that this documentation is purely based on my subjective impressions. I only  report what I have experienced.

Happy new year and bla bla to you all!!!

I hope you had a wonderful christmas and NYE, and are still drunk and happy, I wish I would be too.

Even though Christmas is over already, I want to give away a present to my dear readers!
Why, you are asking?
Because I like you all so much AND because I just passed the 100 follower mark on my Facebook Fan Page.

To say thank you I decided to do a print give away.

What you will get is a high quality, 12×16′ print of a photograph of your choice taken by me.

Unfortunately I cannot give out presents to everyone of my followers, actually I am poor, so only one can get a print.

But, how to choose who deserves it most?
I am afraid that we need a task.

Ok, how about this:

1. I am giving this away to one of my Facebook Followers, so to participate please click the  “Like”-Button that you can find on the Crazy Ivory Facebook Page or even simpler, in the footer of this page.
If you participate through the comments here, please make sure the name you enter is the same as your fb name, so that I can check that you liked me.

You can do this in words, or even better, in a picture or a drawing. Simply post your shot or write your reason in the comments of this post, or comment on the Facebook Post for this topic. Of course the photos or drawings do not need to be perfect, its all about the idea.

To give you the time to figure out a good reason, this Contest will end on 1st February 2012.

So, dont wait too long and participate, I look forward to your interesting contributions and I hope that you will have as much fun with that as I will.

Posted in: Interview, Special|August 3, 2011No Comments

On July 22 2011, the world was shocked by the cruel events happening in Oslo, Norway.
At first a bomb hit the governmental heart of Oslo, then a single person murdered 68 young people on the island Utoya, not far from Oslo.

I visited Oslo not long ago, in April 2011, and so I felt deeply connected to the events.
All this happened just around the corner of where I lived during the few days I stayed there.

Shortly after I heard about these tragical events, I contacted Ole, a fellow photographer that I met while I was in Oslo,  and asked about his situation, whether he is OK, and what he personally saw and experienced.
Fortunately he was on holidays while this was happening, but of course he had lots of info from friends and family who were at home at this time.

Ole told me about a photographer he knows, who had covered the events for the biggest Newspaper in Norway.
I asked him whether he could get me into contact with this guy, and so he did.

Kyrre Lien, a young newsphotographer from Oslo, was directly affected by the bombing, was on the spot only minutes after the bomb went off, and also covered Utoya after the shooting had ended.
I wanted to tell his story and get the word out.

Kyrre agreed into answering some questions, and I really want to thank him for taking the time to do so. Kyrre, who are you, what is your profession?

I am a full-time student at Oslo University studying photojournalism. I have been working as a freelance photographer for four years.

What kind of events do you usually cover?

I usually cover news and sports in all variations. All from press conferences to crime to football.

What happened on July 22?

This summer I was working as a photographer in the largest daily Norwegian newspaper VG [Verdens Gang].

Out office is about 150 meters from the blast site where the bomb in Oslo blew up. I was sitting in sixth floor when suddenly we heard a large blast and the whole building was shaking. The windows was blown out and the fire alarm was activated in the building. I grabbed my two cameras and evacuated the building. The first thing I thought was that our newspaper had been targeted by a bomb. As I came out on the street I started taking photos of wounded people.

As I started running towards what I saw was the blast site I tried to stay away from parked cars in case of a another explosion. After a couple of minutes I came to the middle of the blast site. I saw some dead people there and some critically wounded. Photo by Kyrre Lien / VG

The first thing I thought was that our newspaper had been targeted by a bomb.

Everybody was being treated by bystanders so I focused on my task of documenting the scene. The police or paramedics hadn’t arrived yet because I was there so soon. I could hear people scream for help from the floors in the damaged buildings.

After a couple of minutes at the main blast site the police came and cleared out bystanders and photographers as my self. After this I transmitted some photos and took a taxi to a local hospital to take pictures of wounded being brought there.

After some time there I was called by my news editor. They had heard about some shooting at Utoya. At that time the situation was very chaotic. We did not know if there was one person or a group trying to attack Norway.

I drove to Utoya with two journalists from VG.

There we took pictures of wounded people being brought to shore by paramedics. Utoya is an island about 500m from the main land. We stayed the whole night there talking to bystanders and trying to find out what happened. While many of the wounded was taken away before we came there, we slowly understood the horror of what had happened there.

During the night we found out how many people that had been killed there a hour before we came there. Photo by Kyrre Lien / VG

Did you hesitate about covering the story?

It was never a question for me.

When the bomb went of outside our office I immediately knew this was something that was important to document with pictures.

How long did you stay?

From the first blast in Oslo I worked 36 hour with only one hour of sleep.

Was it hard to do your job there?

It was not so hard to take photos there because I acted on instinct.

After I got some sleep I slowly realised what I had become a witness to. That was difficult to understand.

We have gotten some professional help by our newspaper. It has been good to talk to people about what we have seen and felt.

It has been and is a difficult time for me because I have seen a lot of things that I was not prepared to see. At the same time I think it is important to try to find something positive out of this so that I can learn.

It has been important to keep my head cold and heart warm.

For more pictures by Kyrre Lien from that day please visit Kyrres Website.
I really want to thank Kyrre and the VG for allowing me to include some photos.

My thoughts are with the victims and their families.