Before and After “Abandoned Idyll” 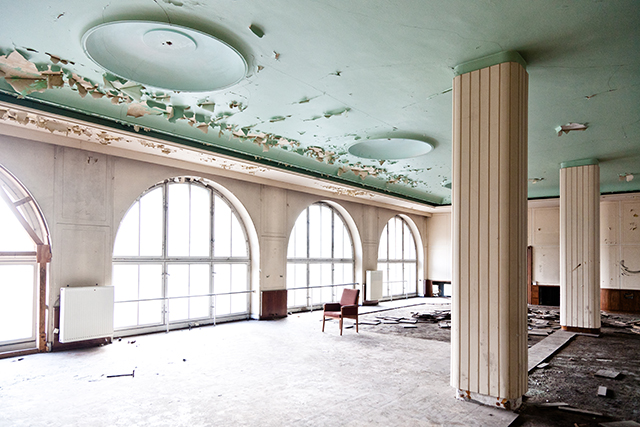 I decided to publish a Before and After of this shot, because the processing took me a total of 4 days (about 1 1/2 hours per day).
The biggest share of time was used for retouching of the Graffiti and other small imperfections.

I started the processing in Camera RAW, where I used the automatic lens correction to correct the vignette and distortion of that the lens produced.
I shot this image with a Canon EOS 5D Mark II + Canon 24-105mm f/4L IS USM, which is a strong combo, but which produces a much larger distortion than I expected.
Since Camera RAW corrects this without any questions, its a complete no-brainer though.

After brightening the image slightly in Camera RAW, I open it in Photoshop where I start with the retouching.

Directly after opening the image in photoshop I start with the retouching.
For that, I used almost exclusively the clone stamp tool to get rid of the graffiti and other small imperfections.

No secrets here, only a very time consuming pixel per pixel retouch.

After having the image cleaned up, I create a stamp visible layer in order to correct the converging lines.
I used the perspective transformation to stretch the upper part of the image in such a way that the pillars become straight and natural.

Then I did some sharpening using the Highpass Filter and cropped the image in order to get a clearer focus on what is important, and to spare the “not so nice” parts out.

If you have any detail question, dont hesitate to ask in the comments =)

Posted in: Before and After|April 4, 2012No Comments 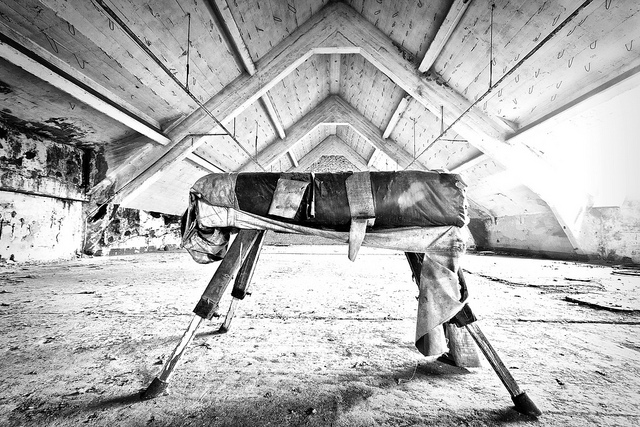 Even though it might not look like it, the processing of this shot took me quiet a while.

I started with intensifying the contrast of the image as a whole in Camera Raw, partly using the contrast slider and partly through creating an S-curve in the curves box.

After opening the image in photoshop I converted it into Black and White using the BW-adjustment layer and intensified the contrast again using curves adjustment layer (S-Curve).

The the most time consuming part of the process began.
I wanted to get rid of all the graffiti in the image, to get a more timeless look and because it distracted the attention of the foreground.

I did this completely using the clone stamp.
It took me about an hour to do it.
I could have done it faster, but I wanted to preserve the structure of the wall, which made it necessary to use a very small brush size.

In the end I used dodge and burn to darken the shadows even more and added a vignette using curves with a mask.

Thats it. I like the result a lot, especially the nice combination of the back- and foreground.

Before and After “Budapest Parliament”

Posted in: Before and After|February 3, 2012No Comments 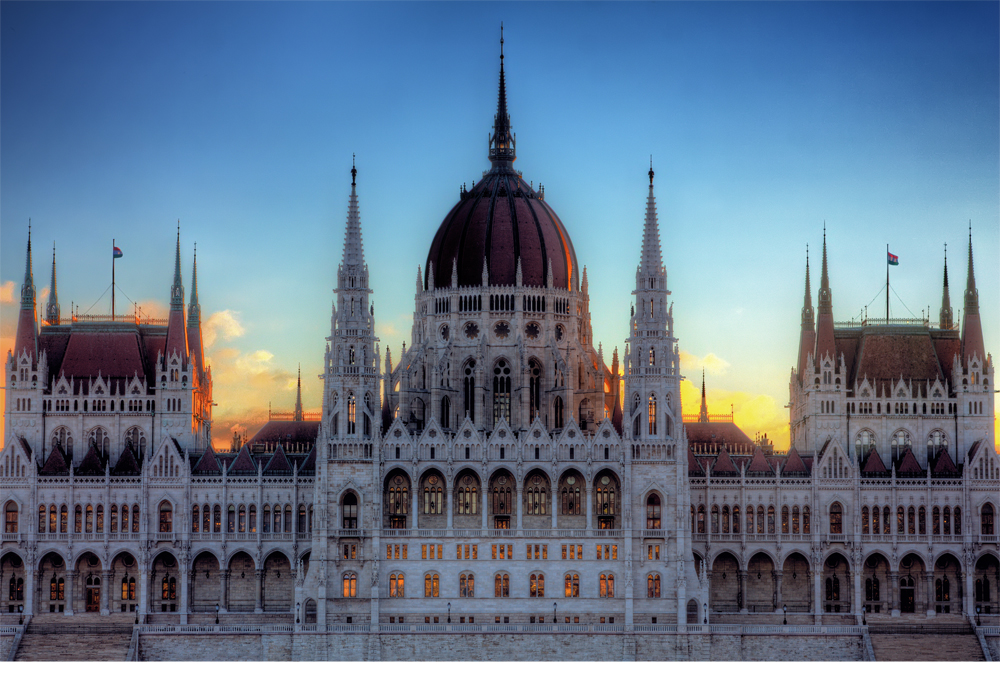 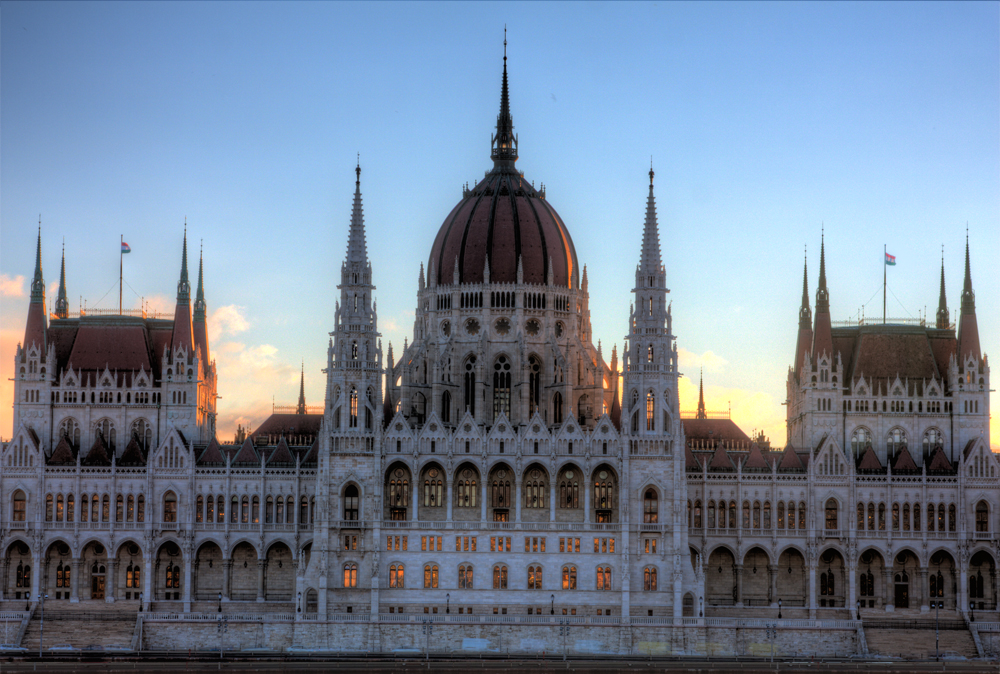 Welcome to this Before and After.

Further up you can see the final image, as well as the unprocessed HDR and one of the 15 exposures that I created the HDR from.

I will now try to explain the steps that I took to create this shot.

As soon as I had the shots on my PC I rendered a HDR from the 15 shots(you can see the result of the HDR rendering further up).

Then the real processing part began.

I began with correcting small flaws that resulted from the HDR processing such as ghosting images in the flags, sensor dust specs in the sky etc.

I then copied the whole image to a new layer, used the high pass filter at a pretty low level (I dont remember the exact setting) and set the blending mode to soft light. This enhances the local contrast and the sharpness of the image. Since this also increased the noise in the sky, I masked the sky out to let the effect be only visible in the building.

Now I wanted to enhance the colors and the brightness so I used several curves with masks. I first used a S curve to increase the contrast on the whole image and then worked on smaller areas. I darkened the sky and enhanced the already existing vignette and brightened the architecture a bit to let it stand out more.
I also created one curve to darken the yellow sky in the right half of the image. I did not want it to be overexposed and blown out, so I corrected this.

After I was happy with the brightness level, I corrected the colors slightly. I warmed up the orange, darkened the blue in the sky a bit and tried to not get too artificial.

To finish the processing, I cloned out all the cars, street lamps and CCTV cameras on the lower end of the frame, so that I would not need to crop it out. It was a lot of stuff to clone, but since the structure was relatively easy, it did not take too long.

In the end I made sure that the frame is symmetric and that all the important edges are straight.

I hope you enjoyed this short tutorial on my processing workflow.

Here you can find my other Before and Afters

Before and After “Szczecin”

Posted in: Before and After|November 9, 20112 Comments 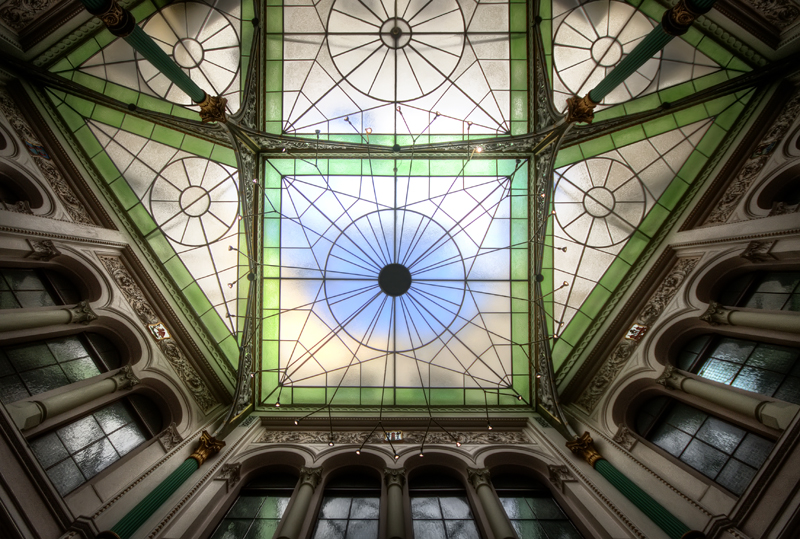 I really love this shot, especially since its not really my typical style. I love the symmetry and forms, but also the color. If you are interested in what I did to achieve this effect, let me break this down for you roughly.

Since the light is very diffuse here, and the range of brightness between the bright ceiling and the rather dark walls is a bit too much for only one exposure, I decided to shoot three Brackets (AEB Mode in Canon Cameras) of the scene to allow me to do HDR processing later.

After rendering an HDR from these single frames, I began with straightening the image to get the most symmetry possible.
I shot this at 10mm from hand. Even if you do the best you can, you will hardly get an 100 per cently straight image at 10mm.

In my case, I mainly had to deal with flipping the image to achieve symmetry, I did not need to heavily transform it.

The key is to make sure you are standing on a perfectly centered spot in the room, and you are holding the camera in the right axis.
It needs to be parallel to the ceiling, to get straight, symmetrical lines.

If you are leaning towards any side, and the camera is not parallel to the ceiling (wall, or whatever you are trying to shoot), you will have a hard time correcting this later. 10mm forgive nothing really.
Rather take 5 more minutes on location, than 60 more minutes in post (exaggered but true).

But lets get back to the processing.
After straightening the shot, I wanted to make it “pop”!
To do so, I increased saturation and contrast (using adjustment layers saturation/hue and curves).
I did not have to do it extremely since the HDR processing already enhanced and brightened the colors.
This  mainly is an act of personal taste, play around until you are happy with the result.

Finally, I took 20 minutes for cleaning up the shot.
Its hardly visible in the Before Image in this post because of the size, but the original shot had many many dust spots on the bright spaces (leaves and dirt on the roof). It really disturbed the calmness of this scene, so I cloned it all out.

Thats it, no other secrets.

I hope you like this Before and After!
If you are interested in a Before and After of a different shot of mine, or you have additional questions,
dont hesitate and contact me via contact form or through the comments under this post!