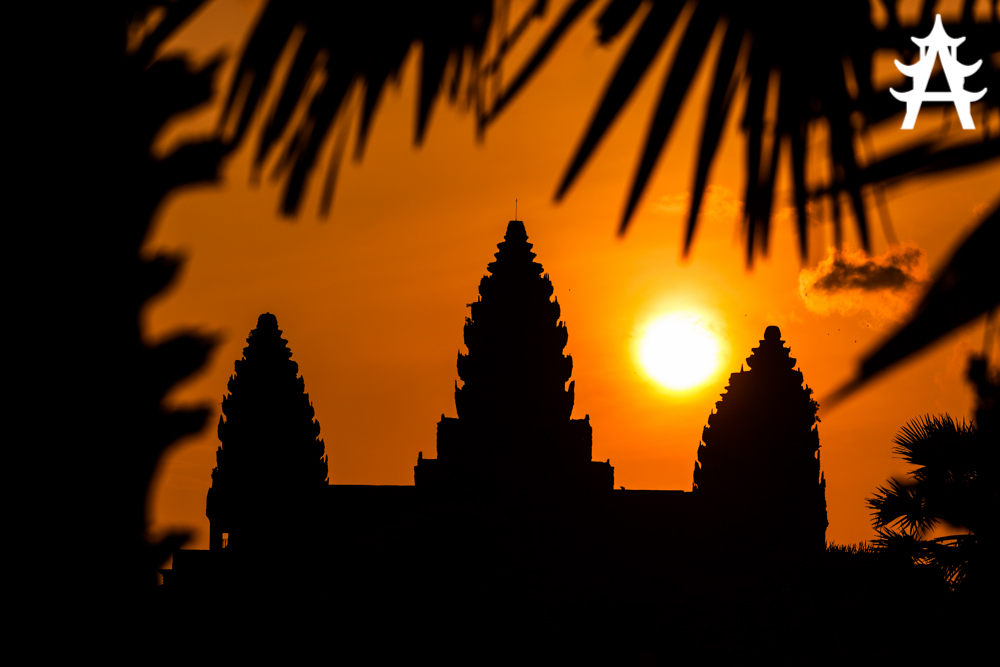 One week in Siam Reap is ending today. I have taken almost full advantage of my 7-day temple pass (I used it on six of the seven days) and I feel quite exhausted from all the walking and bicycling. However, I am glad that I decided to stay a whole week, as this made the temple visits a lot more relaxing. On some days I only spent an hour or two at Angkor Wat before calling it a day. This way I was in no rush, had the chance to revisit the nice temples over and over again at different times of the day and to catch these magical places under different lighting and weather conditions. I feel that I have seen enough here and am looking forward to new adventures.

The next (and last) stop in Cambodia will be Battambang. Its Cambodias second largest (population) city that seems to be popular for one thing in particular: The Bamboo train. Apparently there are a few kilometres of really old french railways that you can explore by makeshift “Norrys”, very small vehicles that can transport goods and which are, if there is oncoming traffic on the monorail system, be dismantled within seconds.

I am not quite sure whether I will actually do that as online reviews sound like its more of a tourist trap than anything else but I will decide that on spot. I guess I will spend my time by renting a motorbike and exploring the surrounding area before heading to Bangkok on October 4th, two days before my brother Gordon arrives in Bangkok to visit me.

I will let you know whether Battambang floats my boat or, in order to use a more fitting phrase, accelerates my bamboo train.

I got up early again, even earlier than yesterday, in order to enjoy the sunrise at Angkor Wat from the first settle illuminations in the sky to the moment when the sun finally shows. The sky was cloudier than the last time and there was no mist, so I won’t be able to beat the shots I uploaded yesterday. Instead I want to write about an interesting observation I made today.

Even though Angkor Wat is huge and offers enough place for the masses of tourists that arrive daily to experience the sunrise, they tend to gather in a few distinct spots. The most popular are the ponds that are situated on the left and right hand side in front of the temple as these offer the opportunity to catch Angkor Wat with a nice reflection. However, the tourists distribution among those two ponds is, lets call it uneven: 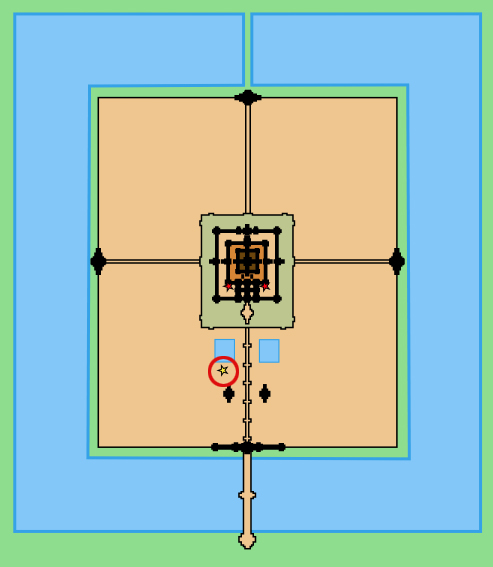 Images taken around 5:45AM (15 minutes before sunrise)

To be honest, I get goosebumbs from looking at the crowd. I could hardly imagine a more unrelaxed and more unatmospheric place to shoot a sunset from than this. This is why I decided to head to the right hand side instead. I was more than amazed to realize that I was the ONLY person there for the first 45 minutes of my stay. Both shots were taken around 5:45AM, around 15 minutes before the sunrise, at this time the right hand side had gathered a total of 4(!) spectators, while the left hand site might add up to 150 people (ballpark guess).

Now, it might be that the images you can get on the left hand side are a tad better (I did not check this yet but will certainly do in the coming days), if that is the case the difference can’t be too big. As the temple is symmetrical and the ponds are about the same size, the situation is more or less the same. It might be that the sun comes up a bit more to the left, which would still give you plenty of photo opportunities from the other side. You also need to remember that dozens of people in such a crowd have no idea how to use their camera, which leads to a high frequence of camera flashes fired permantly. If you plan to shoot long exposures, this can easily ruin your shots.

Angkor Wat before sunrise (from the right) 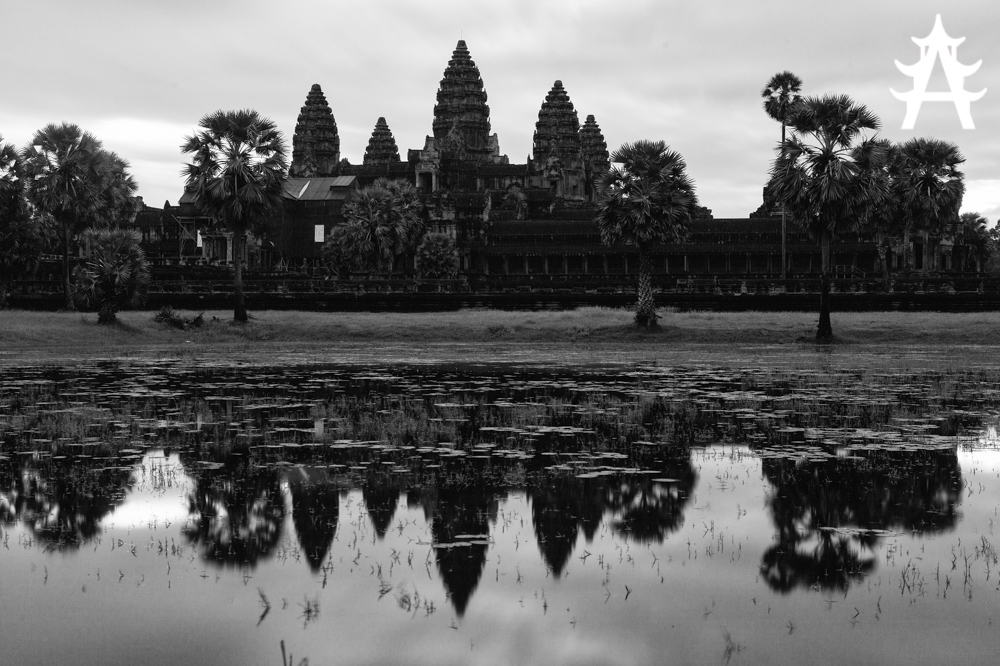 I personally really enjoyed the sunrise from the right hand side. It was quiet, it was serene and it was easy to believe that I was the only person on the temple ground. I guess in the end it all comes down to whether you want to experience this moment or whether you want to capture it from what is said to be the best angle. I can only recommend to give it a shot and head to the right.

Two days of Angkor Wat and a surprising conclusion 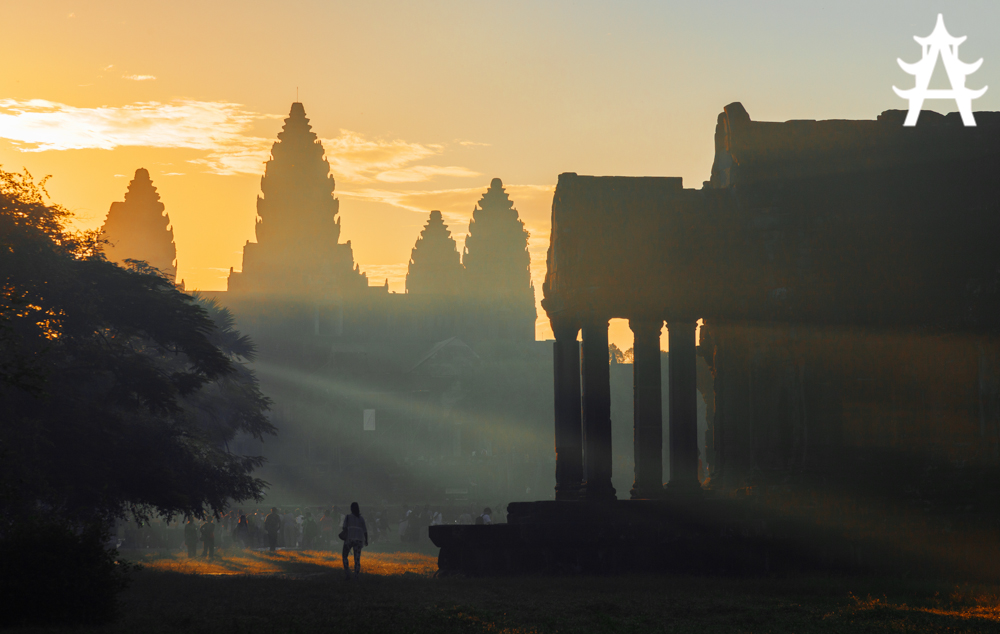 Regular readers of this blog might expect to read an extensive rant on what a sellout tourism hell Angkor Wat is. To be perfectly honest, two days ago I would have expected the same. Surprisingly (and that is why the word is in the headline of this article) it won’t. But lets start from the beginning.

I arrived in Siam Reap very early yesterday and did not waste much time in my hotel. Instead I got myself a rental bike and made my way to Angkor Wat. For the people who haven’t heard of Angkor Wat (shame on you!! No, just kidding) I can only refer you to the extensive Wikipedia Article that begins with this spot on description:

Angkor Wat  is a Hindu, then subsequently Buddhist temple complex in Cambodia and the largest religious monument in the world.

Well, yeah. Its big. And its certainly beautiful. And, and that is what is not mentioned in this first statement, its extraordinarily crowded with tourists. Knowing this, I was not looking forward to visiting Angkor Wat too much. Tourist sights tend to disappoint me in 19 of 20 cases and I did not see any reason why Angkor Wat would be an exception. 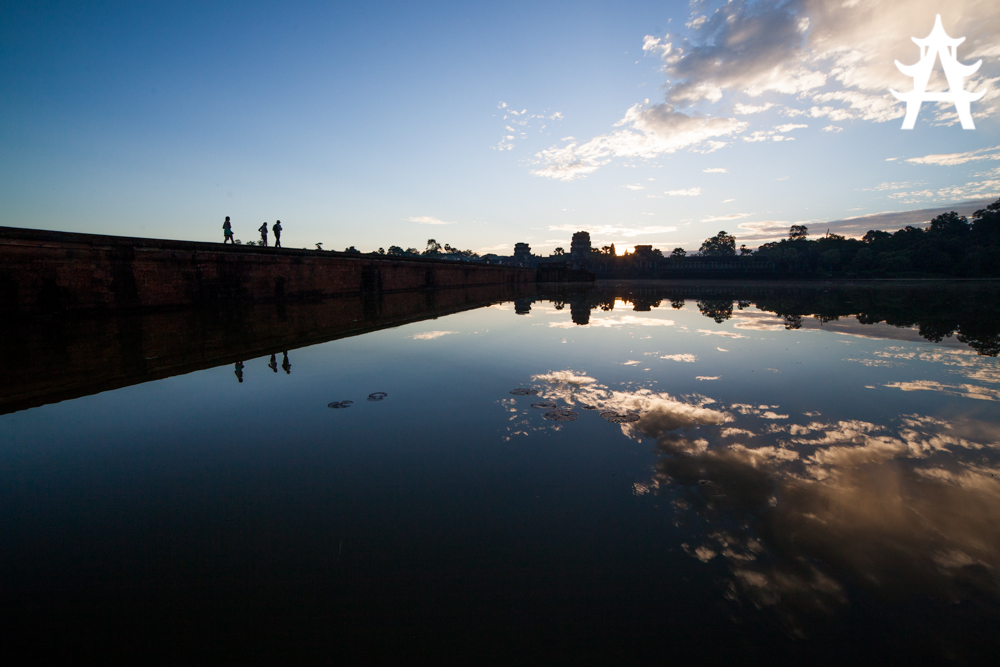 The first day I arrived around 10AM and it was already full of people. I explored the insides and realized that its indeed possible to find quiet spots here, all you need to do is to leave the main walkways and head to the smaller alleys. I also realized that apart from the tourists, there are many many local people strolling around here, some sell their goods and some are only enjoying the place. This offered a couple very nice opportunities for photography and gave the shots some local color.

Today, on my second day, I got up at 5AM in order to catch the sunrise at Angkor Wat, which is a common thing to do here. I was already running a bit later than expected, so I loaded my bike into the first Tuk-Tuk I could find and off we went. I am glad that I did that.

I arrived just in time for one of the most beautiful sunrises I have ever witnessed. Since we had some rain the night before, the temple was wreathed in a smooth mist and the sunrays were visible and long. The puddles and ponds on the temple ground offered thousands of perspectives on the scene and it was more than enjoyable to play around and find the interesting angles.

To my surprise, the masses of tourists that had woken up early as well did not annoy me as much as I would have expected. The moment was too beautiful to let myself be distracted by that. The photographs in this article can only convey the feeling to a certain extent but I am sure you get the idea. 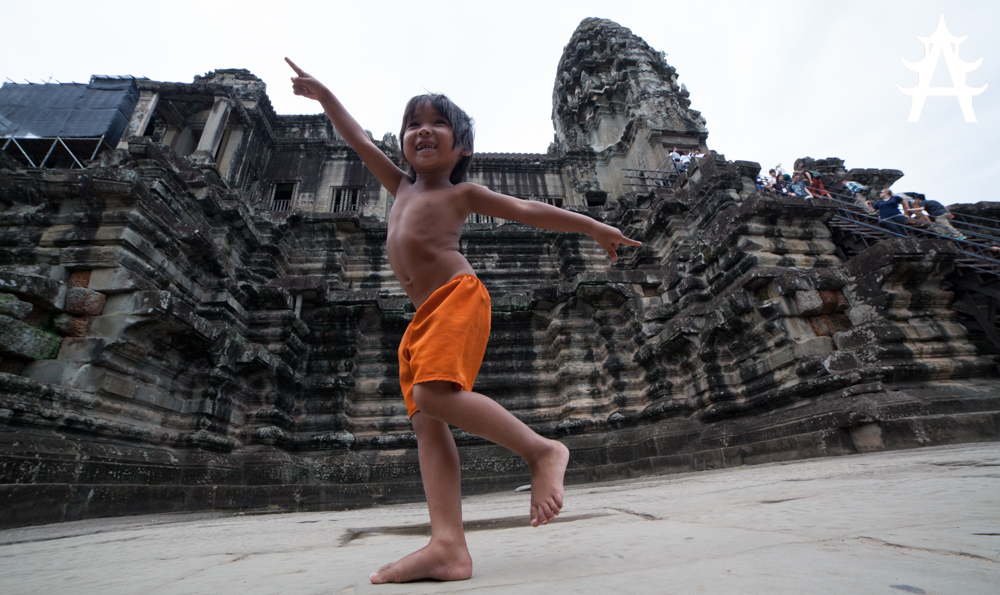 It was certainly the nicest time I ever had in a so called “sight” and one of the nicest sunrises I ever witnessed. Luckily I got myself a 7-Day pass for the temples around Siam Reap (costing a whopping $60 BTW), so I will be able to enjoy this spectacle a couple more times in the coming days. 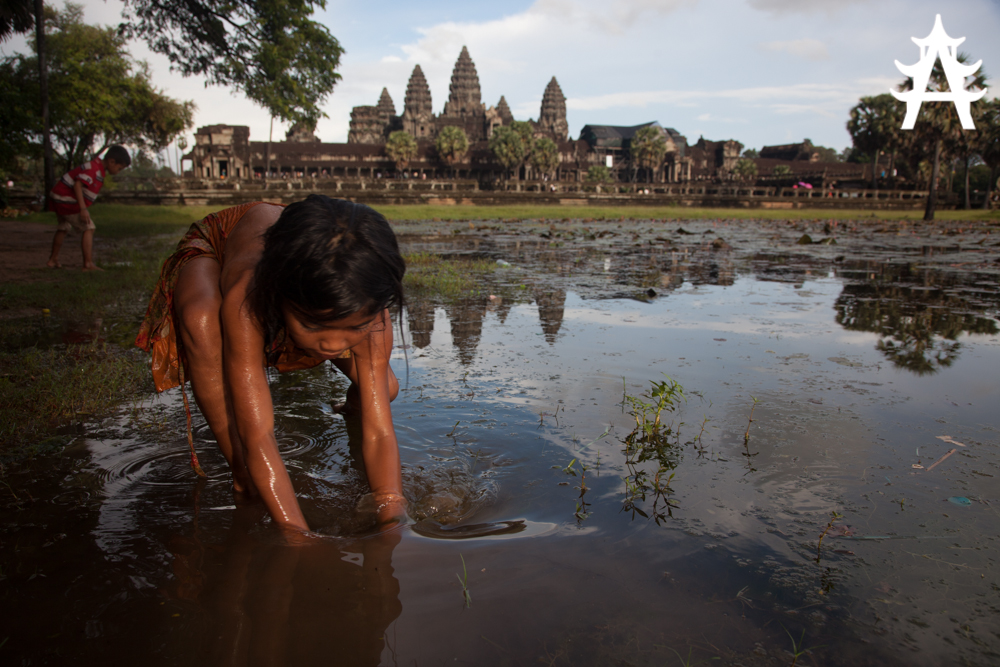 If you happen to be in Cambodia, check it out. Get up early! It worth it!

Travelling in Style: By Hotel Bus from Sihanoukville to Siam Reap As the weather on Koh Rong was not on my side (it rained almost constantly for the whole three days of my stay), I decided to move back into the central part of the city where I hardly had to deal with rain over the course of the last three weeks in Cambodia. Since I had already covered the whole eastern part of the country the next stop would be Siam Reap.

As always, my travel medium of choice was the bus, however, I decided to try out something new. Instead of spending an extra night in Sihanoukville and departing in the early morning, I booked an overnight bus, or to be more detailled, a hotel bus. A hotel bus is basically a big travel coach that is equipped with around 24 “sleeping boxes”. My final decision to book this one was greatly impacted by the fact that this 12 hour bus ride would only cost 13 Dollars, which is dirt cheap even at cambodian standards.

One sleeping box is supposed to offer space for two people…in theory. In reality these boxes are tiny as hell. I am around 180cm and did not fit in properly (I easily could have used another 10 to 15 cm). Even though the size of the boxes is a joke, its equipped with a few nice extras such as an electrical outlet (important if you want to work on your laptop for a while), your own TV screen, headphones and wifi (which was massively advertised but not available on my bus). Now, sleeping together with a stranger on this 1 sqm is certainly unusual…I suppose. I was lucky enough to have one whole box to myself which fixed the height problem (I was able to lie diagonal).

The time passed quickly, I watched a couple episodes of Breaking Bad on my laptop before trying to fall asleep. This was not as easy as it should have been, mainly because of the air condition. As usual in South East Asia, the bus drivers have an extreme taste when it comes to temperatures. I would guess that they cooled the coach down to something around 15°C, which is really freaking cold. I was lucky enough to have to blankets for myself but was still shaking from the cold. This was definitely the worst part of this trip. Not only am I sure that I catched a cold, I also left the bus extremely tired.

To sum it up, I was glad that I chose the bus, even though I should have worn a couple extra layers of clothing. With that in mind I will certainly book a hotel bus again if the chance comes up.