27 people and a minivan – Travelling in Cambodia 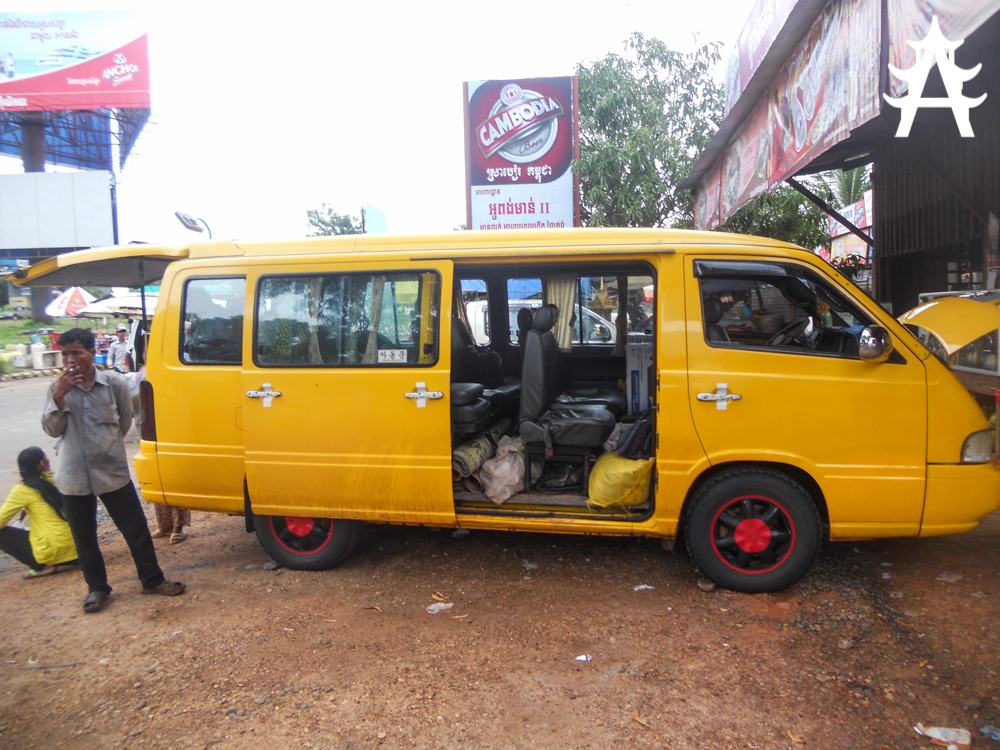 Now, after having almost finished my third month in Asia (where I travelled more than 6500km until this point) I would call myself an experienced traveller when it comes to local transport in this region of the world. Still, this continent never ceases to amaze, suprise and shock me.

Todays bus journey from Ban Lung to Kratie was extraordinary though. In order to keep this article at a readable length I skip the part where I asked around the local motortaxi drivers how to get to Kratie, then took a Tuk Tuk to the local bus station only to find out that the next bus would not leave before tomorrow morning, then got the Tuk Tuk driver to get me back to the motortaxi drivers who then proceeded to organize a minivan that would leave in 30 minutes. Sounds complicated but in reality, it takes some time for getting used to the cambodian way of getting across the country.

I finally sat in the minivan was positively surprised. The van looked safe (for asian standards) and clean (again, asian standards) and I got a seat in the first row behind the driver, which offered lots of legroom. Success. The 11-seat minivan was already filled with passengers, but only to the extent of one person per seat. Naively I assumed that it would remain to be like this until Kratie. I should have known better.

Within the first hour of the journey the bus stopped occassionally to pick up more passengers or goods in varying number and shape. Quickly my legroom vanished as the bus was loaded with bags of rice, tools, wooden boards and humans after humans.

The final count (that might not be 100 per cently accurate due to my limited field of vision in the bus) was a minimum of 25 persons inside the minivan and two guys on the roof. However, whenever rain set in the two roofies changed for the inside of the minivan as well, raising the total inside count to minimum 27 people. It was…cosy. 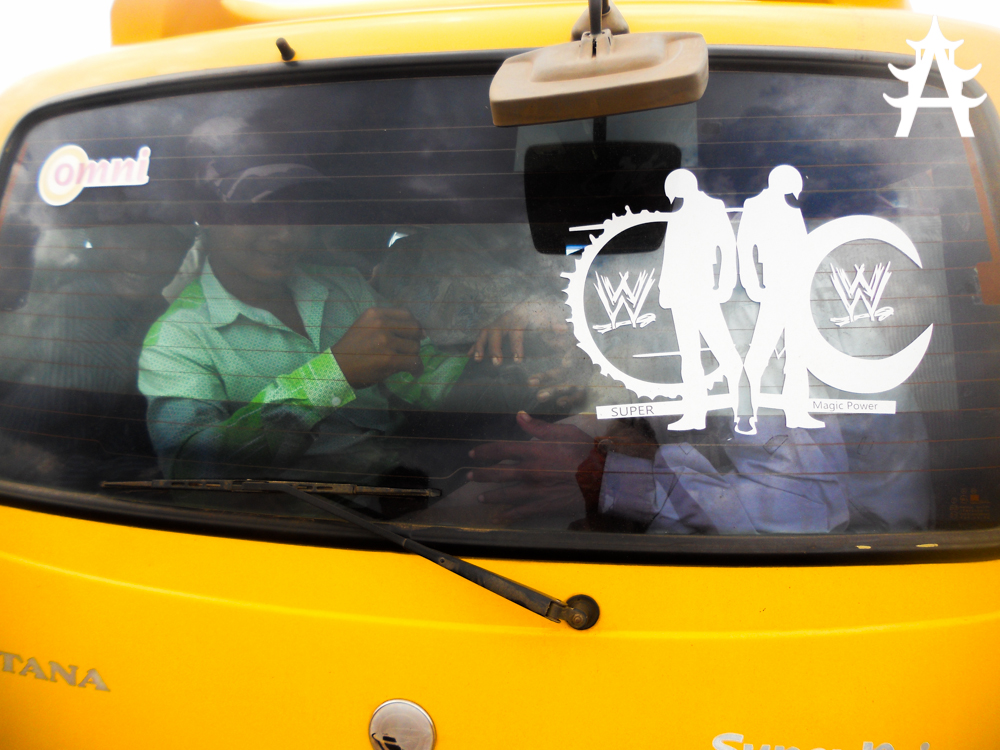 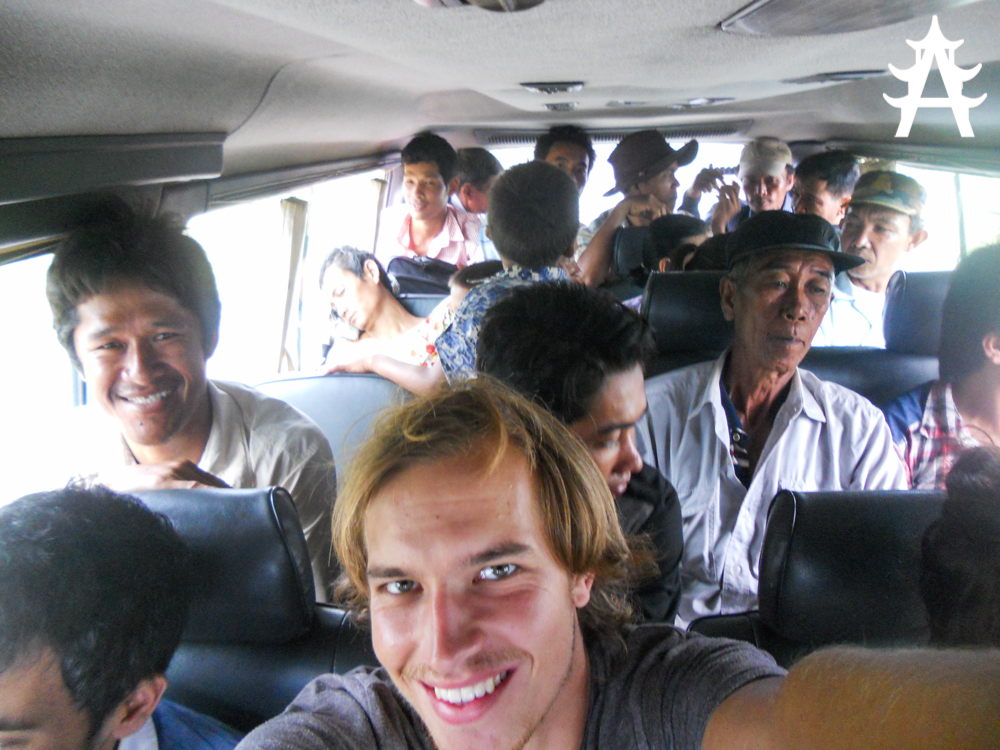 I still was in a better position than most other passengers, due to my seat being behind the drivers row. With legroom not being a big issue for me (comparing to other passengers that sat crammed with twisted legs for hours) the trip had other surprises in store for me.

It turned out that on of the guys that was sitting diagonally from me, with his back against the side door of the van, was travel sick. I know this not because he told me but because he started vomiting inside the bus without signalling it in any way beforehand. Due to his position, he had to turn his head for the side window, which did not work very well. Instead he re-enacted a human vomit lawn sprinkler, covering the side door and the guy sitting next to it in a layer of barf. This strongly resembled on of the first things that I experienced after arriving in my hostel in Vientiane, Laos (read #2). It was simply wonderful as you can imagine. 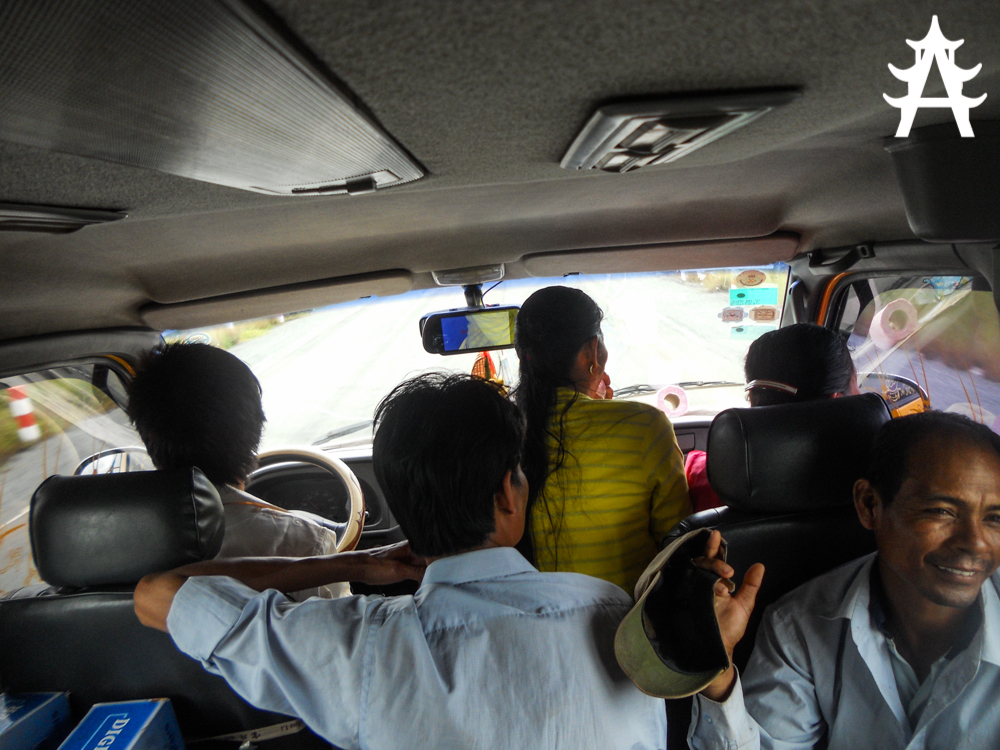 After the bus and the affected passenger were rinsed off, we were driving again and after an hour of head-shaking about the weirdness of this trip we finally approached Kratie.

Cambodia by Minivan. I am certain this won’t remain the last experience like this =)